Common Causes of a Stuffy Nose 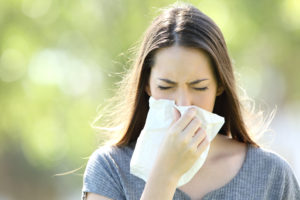 Most people get a stuffy nose at least a handful of times per year. Often referred to as nasal congestion, a stuffy nose can produce uncomfortable symptoms which can be brought on by a number of triggers. Pinpointing the precise cause of your nasal congestion will ultimately help you receive the care that you need to breathe easily again.

The common causes of a stuffy nose include:

Allergies are a very common cause of nasal congestion. If you have allergies, your immune system attacks foreign substances such as pollen, pet dander, mold, and dust mites. The natural immune response to an allergen leads to inflammation and mucus production that can also cause a stuffy nose.

Several common viral infections can also be the source of a stuffy nose. When a virus enters your body through the nose, it can multiply within the lining of the sinuses. As the immune system works to fight the infection, it causes inflammation that can trigger a stuffy nose. The common cold, flu, respiratory syncytial virus (RSV), and COVID-19 are examples of viral infections that can provoke nasal congestion.

Acute sinusitis occurs when the sinuses become swollen and can lead to mucus accumulation,  resulting in a stuffy nose.  There are also other associated symptoms including sinus pain and swelling. In most cases, acute sinusitis is triggered by the common cold, hay fever, nasal passage abnormalities, and smoke exposure.

Sinusitis is easy to mistake for allergies and typical viral infections. Therefore, to know for sure whether or not your stuffy nose is the result of sinusitis, you’ll most likely need to consult a doctor for an evaluation.

At Suncoast Urgent Care, we provide you with relief for nasal congestion, along with other respiratory complaints. Contact us today to learn more!